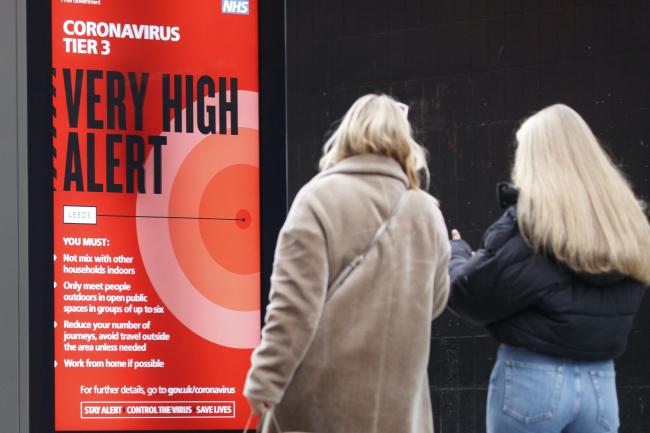 Boris Johnson has announced areas of England will go into a Tier 4 lockdown as of tomorrow.

The PM said: “We cannot continue with Christmas as planned.

“In England those living in Tier 4 areas must not mix with anyone outside their own households at Christmas.

“Across the rest of the country, the Christmas rules will now be limited to Christmas day only rather than the five days as previously set out.

“There will be no relaxation on December 31 so people must not break the rules at new year.

“I know how much emotion people invest at this time of year and how important it is for families to be together, so I know how disappointing this will be.”

In August, the Department for Education published a four-tier structure, in which all educational institutions – including primary schools and early years settings – would be shut.

On October 26, Health Secretary Matt Hancock told BBC Breakfast: “We’ve always said that we take nothing off the table. Having said that, we have seen the rise in the number of cases has slowed a bit.

“The problem is it’s still going up, and while it’s still going up we’ve got to act to get it under control. We rule nothing out, but at the moment the three-tier system is what we’re working to and it’s effective in slowing the growth of this virus but it hasn’t brought this curve to a halt.”

Government scientists including Prof Chris Whitty, the chief medical officer, warned that the “base line” Tier 3 restrictions were unlikely to be enough to bring down the R rate alone.

What areas are in Tier 4?

The following areas will be under tier 4:

What are the Tier 4 rules?

People in Tier 4 areas must stay home, and all non-essential retail is forced to shut.

You can only meet one person outside not on your property.

Travelling outside of a Tier 4 area is completely banned – including for Christmas.

The measures will come into force tomorrow morning, December 20.

The new strain, announced by Matt Hancock last week, is thought to be most prevalent in the southeast.

– Snow has covered large areas of Berkshire – snow not set to stop until around 12pm today – traffic, pictures and forecast updates to be announced throughout the day Slough Observer | News …

MORE than 46,000 people have tested positive for coronavirus in Berkshire. Slough Observer | News …

MORE than 44,000 people have tested positive for coronavirus in Berkshire. Slough Observer | News …

Thames Valley Police has confirmed that ‘it is completely safe to walk your dogs in Windsor & Maidenhead’ following rumours of alleged dognapping in the area. Slough Observer | News …