A further easing of lockdown restrictions will take place in England next week (Monday, April 12) as stage two of Boris Johnson’s road map out of lockdown begins.

The Prime Minister unveiled his four-stage plan to lead the country out of a third national lockdown in February.

Pupils across England returned to the classrooms on March 8 in the first stage of Boris Johnson’s road map out of lockdown.

On March 29, groups of up to six people will be allowed to gather outside in parks or public gardens ahead of Easter Bank Holiday weekend.

Outdoor sports facilities such as tennis and basketball courts returned, as well as organised adult and children’s sport including grassroots football and golf

The “stay at home” order ended, and the Government encouraged people to stay local where possible instead.

The main focus of the Prime Minister’s Downing Street press conference on Monday was to confirm that stage two of the road map will go ahead as planned on April 12.

So, with stage two set to go ahead next week, people in England will be able to enjoy a number of freedoms they have had to go without for months.

Here is what you will be allowed to do in England from April 12.

Outdoor hospitality will return meaning people will be able to enjoy outdoor beer gardens and restaurants, provided they sit outside.

There will no longer be a need for people to order a substantial meal with alcohol and there will be no curfew as we have seen in the past.

However all customers will have to order, eat and drink while seated.

Non-essential retailers will once again reopen their doors to customers as high street stores look forward to welcoming customers once more. New rules will be in place including social distancing and having to wear a face mask to help limit the spread of the virus.

People will finally be able to get their hair cut as hairdressers reopen as well as other personal care premises such as nail salons.

Public buildings such as libraries and community centres will also reopen to the public.

Indoor leisure facilities will also be allowed to reopen under guidance set out in the government’s road map guidance.

Indoor swimming pools will also reopen after outdoor pools were allowed to reopen last month. However, they will only be open for use by people on their own or with members of their household.

The majority of outdoor venues in England will reopen next Monday including theme parks and zoos.

Wider social contact rules will apply in such establishments to prevent the mixing of different households indoors.

Drive-in cinemas and other drive-in performances will also be permitted to go ahead.

Although foreign holidays are still banned, self-contained accommodation such as holiday lets, where indoor facilities are not shared with another household, will be allowed to reopen.

There will be no change to funerals with up to 30 people will be able to attend however the number of people able to attend weddings, receptions and commemorative events such as wakes will rise from six to 15.

Boris Johnsons also announced that care home residents will be allowed an extra visitor from April 12, meaning two people can visit at a time.

When will further changes be announced?

So far, the road map has continued to go ahead on schedule however ministers have stressed that these dates are subject to change based on the data.

That means there is a chance further easing of restrictions planned for next month may not happen on May 17 as planned, if the four tests are not met.

Those four tests are:

On Monday, Mr Johnson, setting out the move to the second step of the road map on Monday, said the shift was “fully justified by the data”.

He said that he had seen “nothing” to make him think he would have to “deviate” from his intention to scrap all restrictions by June 21 at the earliest. 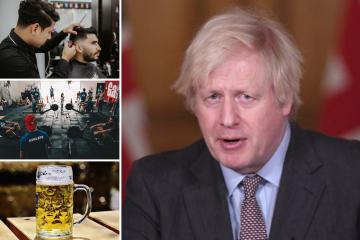 The death of a man while working at Gatwick Airport is to be investigated by Britain’s national safety regulator. Slough Observer | News …

Drivers across Slough are consistently warned about the presence of speed cameras through various road signs. Slough Observer | News …