Here are the criminals locked up in the county this month.

Three people were sentenced in connection with the murder of Reece Heffernan.

The 22-year-old was stabbed in Romany Lane, Tilehurst, on October 31 last year.

Earlier this year, three men from Reading, Earley and Wokingham were jailed for life having been found guilty of his murder.

On November 28, another two men and a woman received a combined seven years jail time in connection with the incident.

Junior Lopez, aged 27, of Paddock Close, Windsor was sentenced to 18 months’ imprisonment at a hearing at Reading Crown Court on November 16.

He pleaded guilty to one count of assault occasioning actual bodily harm.

Richard Cohen, aged 37, of no fixed abode, pleaded guilty to one count of burglary at Reading Crown Court on November 11.

He was sentenced to three years in prison.

Michael Bennett, aged 54, of Stanwell, Surrey, Nick Graham, aged 34, of Green Lane, Hounslow and James Knight, aged 38, of Chinchilla Drive, Hounslow all pleaded guilty to one count of burglary of a dwelling.

Steven Baldwin, aged 50, of Ray Park Road, Maidenhead, was given a four month prison sentence, suspended for a year after pleading guilty to one count of possession of a knife/sharp pointed article in a public place at Slough Magistrates Court.

A 45-year-old man who robbed a Reading betting shop with a wooden stick shaven to a point was jailed for three and a half years.

Wayne Mcleod, of HMP Coldingley, went on to verbally threatened a staff member at a Co-op the next day and forced the man to hand over cash from the till.

At Reading Crown Court on November 10, a jury found him guilty of two counts of robbery.

Gail Goodrick, aged 41, of Waylen Street, Reading, pleaded guilty to a count each of possession with intent to supply crack and heroin in a hearing at Reading Crown Court on November 2.

As well as a three year prison sentence, cash to a total of £279 was forfeited and it was ordered that the drugs were destroyed.

Rrahim Statovci, aged 19, of Foundry Court in Slough was sentenced to 40 weeks’ imprisonment following a hearing at Reading Magistrates’ Court on Thursday (3/11).

On Wednesday (2/11), Statovci was stopped close to Slough train station by British Transport Police officers and admitted being in possession of cannabis and a knife. 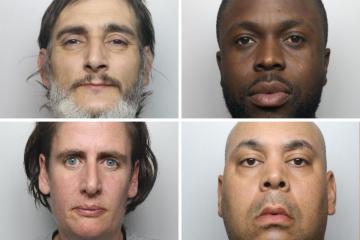