MEET the government-appointed duo who will be helping to fix council finances for the next three years.

Lead commissioner Max Caller and finance commissioner Margaret Lee came to Slough in December after the government appointed them to oversee the cash-strapped council’s recovery until 2024.

This was in response to two damning reports on Slough Borough Council’s (SBC) finances and governance, produced by the government and the Chartered Institute of Public Finance and Accountancy (CIPFA).

Local government minister Kemi Badenoch told Parliament in November the commissioners would “start the process of rebuilding confidence and trust between the council, councillors and the communities they serve”.

READ MORE: Slough Council’s woes “will get worse before it gets better”

During their time in Slough, the commissioners could cost SBC up to £1m a year. The lead commissioner could be paid £2,400 and his assistant £2,100 per week.

The duo’s job is to oversee the SBC’s recovery and to challenge decision-makers throughout the process, as well as hold them to account to make sure the council doesn’t slip back into ruin.

Mr Caller’s job as lead commissioner is to ensure the council is complying with government directions, to exercise powers taken away from SBC and given to commissioners [such as appointing and dismissing statutory officers], and to report to the minister and secretary of state on the council’s progress every six months with their view what the council needs to do to keep that improvement in place.

Previously, he led the best value inspections at Northamptonshire and Liverpool and was a commissioner at Tower Hamlets.

During the Tower Hamlet intervention, the then Ministry of Housing, Communities, and Local Government said Mr Caller had extensive experience, particularly in diagnosing poor practice and leading improvement, as well as dealing with complex budgets.

Afterwards, he became the chief executive of the London Borough of Hackney from 2000 to 2004 where he managed to transform it from one of the worst local authorities to one of the fastest improving.

He is also the former chair of the Local Government Boundary Commission for England.

Mr Caller has done political work outside of the United Kingdom, overseeing elections in Albania and Montenegro, and as a Commonwealth observer for elections in Kenya and Ghana.

Because SBC’s finances are very bad on an “unprecedented” level, Margaret Lee’s role as finance commissioner is to work with the local authority to devise a mechanism and discipline for the council to bounce back and set legally balanced budgets each year.

Margaret Lee recently retired from Essex County Council where she held the post of Executive Director for Corporate and Customer Services, as well as holding the senior role of chief finance officer.

She is the finance lead on the Improvement and Assurance Panel for the London Borough of Croydon, which announced bankruptcy in 2020.

The lead commissioner said this is an “intense programme” to start out where the duo is working three to four days a week each as well as the weekends to help fix SBC’s financial mess.

But Mr Caller believes this level of work will “ease off” throughout the year when SBC has a coherent recovery plan in place the commissioners can endorse and the council actioning it.

He said: “This council has got to come back to the mainstream of local government. Our job is to help them get there and to stop them not slipping back.

“Our intention would be that the council improves sufficiently quickly that we won’t be here in three years’ time and that the time we spend in Slough in year three will be much less because we can rely on the council’s practises, processes, and delivery.

“But at this minute, they have a huge amount to do and it’s a struggle for them.” 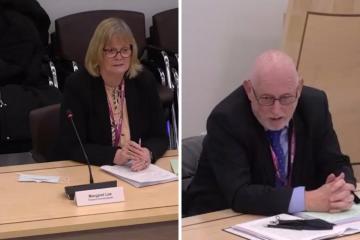 There are so many fantastic places to eat in Slough that it’s hard to know which to settle on. Slough Observer | News …

WARD councillors have spoken out about Norden Farm amid fears the Royal Borough council could pull its funding. Slough Observer | News …

Two men from Slough have been arrested in connection with a stabbing at a party in Leicester. Slough Observer | News …

A PLASTER was found by a Slough diner after the they “almost choked” on his spring roll. Slough Observer | News …