A SHORTFALL of 5,000 in housing is a ‘very, very serious problem in Slough’, councillors have been warned.

Members of the overview and scrutiny panel were told on Thursday (September 10), the Slough regeneration framework – which sets to revamp the town centre with new homes and offices – will not completely address the borough’s housing need.

The framework sets out to deliver 7,400 homes in the town centre – mainly flats – with a further 1,600 identified.

Paul Stimpson, strategic lead for planning policy and projects at Slough Borough Council, warned councillors it will be a ‘challenge’ for the local authority to meet its 15,460 housing target over a 16-year period – which is an average of 966 a year.

He revealed the council may have to release ten green belt sites on the edge of the borough to meet the ‘significant need’ for additional family and affordable homes as well as the creation of approximately 15,000 jobs for Slough’s future economy.

This was part of a report presented to councillors called the spatial strategy – which will set out where dwellings will need to be placed in Slough to address the borough’s need whilst conserving natural and historical sites and environment.

Mr Stimpson said: “Despite building those 9,000 [homes] in the centre of Slough, we haven’t really got many opportunities elsewhere because we’re protecting the suburbs and not building elsewhere.

“We a have shortfall of 5,000 houses in Slough and that’s a very, very serious problem because we have a genuine need with a young population – we do need to meet that need.

“It’s going to be a serious challenge for the local plan going forward with a plan that doesn’t meet our housing numbers.

“You may think we’ve got too much development in the town centre – but actually others will say it’s not enough and we have to come to a right balance.”

So far, a few brownfield sites have been identified as a ‘selected key location’ for redevelopment such as the former trades sales area on Bath Road known as the Cippenham Central Strip.

Due to Heathrow’s third runway plans not happening in the long-term, the land at Colne Valley Park will be ‘safeguarded’ from being developed.

However, the Poyle Trading Estate could be changed to provide airport related facilities to take advantage of its location next to Heathrow.

The northern expansion – which the council seeks to add up to 10,000 homes in South Bucks – could remain an opportunity after the planning inspector concluded Buckinghamshire Council failed in a ‘duty to cooperate’ – which effectively means they ignored Slough in their local plan.

However, the expansion is being assessed in a study and the results won’t be available until the end of the year.

A six-week public consultation will be conducted from November 2 – December 11, 2020 to gather views from residents, landowners, highways and transport, etc. to explore if vehicles can cope with the demand and if there’s viability of capacity to bring the plan forward.

Another consultation maybe launched next year on releasing some of Slough’s green belt sites to meet the housing demand. 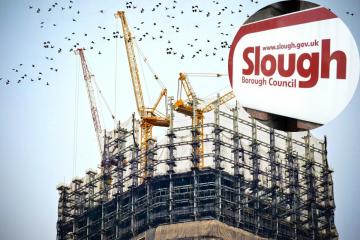 LEADING councillors have defended “ill thought out” bus and cycle lanes on the A4 as the petition is heard at a full council meeting. Slough Observer | News …

The latest number of cases of Covid-19 has been confirmed as 4,207 in Berkshire. Slough Observer | News …