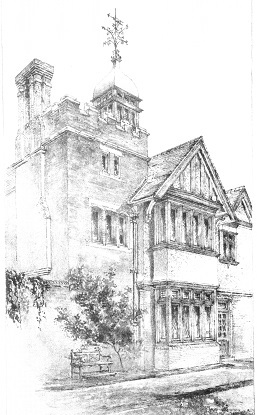 This article traces the history of the site in Hollybush Hiil, Stoke Poges, which is currently occupied by the Khalsa Secondary Academy.

The Sikh Education Trust first established a Khalsa Primary School in Slough in 2007. Parents of the children attending the school soon began asking about the possibility of the Trust opening a secondary school in the vicinity. When the Pioneer House premises in Stoke Poges came on the property market in 2013 the opportunity was too good to miss. The Sikh Education Trust acquired this site in Hollybush Hill and the Khalsa Secondary School was established.

The site was originally a part of the Stoke Park Estate, whose long and colourful history can be traced back to the Domesday Survey in 1086. From 1066, the estate was inherited in a direct line of descent for over 500 years. In 1581 it had to be sold to the Crown to pay the outstanding debts of Henry Hastings, 3rd Earl of Huntingdon. His father Francis, the commander in chief of Henry VIII’s army, had rebuilt the Manor House (part of which can still be seen today) in 1555.

The historic parkland was laid out by two outstanding landscape designers of the 18th century, ‘Capability’ Brown who designed the grounds and lake in 1750 and Humphry Repton who further improved the landscape.

One of the later owners of Stoke Park was Edward Coleman (1863 to 1885). Wilberforce Bryant, son of William Bryant, the founder of Bryant and May matchmakers, bought the estate in 1887. Bryant died in 1906 and in 1908 the Park was acquired by ‘Pa’ Lane Jackson (Founder of the Corinthian Football Club).

He leased the mansion and half the land to the Stoke Poges Golf Club. The other half was sold for development and so the deer departed after hundreds of years, to other parks and to the Scottish Highlands.

In 1928 the mansion and golf course came into the ownership of Sir Noel Mobbs, the founder of Slough Trading Estate. He also subsequently acquired the old Manor House. In 1958 the Eton Rural District Council became the owner and its successor South Bucks District Council granted a 250 year lease to IHG Ltd who sub-leased it to Stoke Park.

Working with English Heritage and the National Trust, Stoke Park has invested an enormous amount of time and money in restoring the Mansion, the ‘Capability’ Brown lakes and the Humphry Repton landscape. In addition they have restored the famous 18 hole golf course and laid out a further 9 holes.

In 1885 a Mr Frederick Pritchard of Gloucester Terrace, Bayswater, London, bought some 40 acres of land to south of what was then Uxbridge Road (now Hollybush Hill) in the Stoke Park Estate to build a “summer residence”. This he called Carton Tower.

The house was designed by a local architect Mr J M Ferguson, and the building work was undertaken by Mr George Almond of Burnham. Carton Tower was one of two assignments attributed to Mr Ferguson which featured in the architectural press, the other being a very ornate grand staircase in Waverley Court in Camberley, Surrey.

The report about Carton Tower stated that “The view from the summit of the tower is particularly charming, and includes many notable objects, among them the spire of Stoke Poges church …., also a long stretch of the valley of the Thames, including a fine view of Windsor Castle and the Long Walk.”

The article continues “The whole of the buildings are supplied with water from an artesian well two hundred and fifty-five feet deep, sunk and bored into chalk by Mr Margrett of Reading, who has succeeded in obtaining a supply of excellent quality and practically inexhaustible.

“There are also large underground tanks, capable of containing some three thousand gallons of rain-water.”

Pritchard’s wife in particular was an active member of the local community, for example celebrating her birthday by giving a party for the “widows of the parish” in November 1892.

By 1901 the Pritchards had left Carton Tower, which was then occupied by Mr Alfred S Albert, a bachelor. In July 1907 he took the chair at a meeting of the Stoke Poges Institute.

It would seem that Mr Albert vacated Carton Tower later in 1907 because in October an advertisement appeared in the national Morning Post “A gentleman about to travel wishes to recommend his Butler (with footman); married, one child eight years; age 36, height 5ft, 6.5 in; wages £65 and cottage; good personal character – Apply Butler, Carton Tower, Stoke Poges Bucks.”.

Carton Tower was then purchased by publisher Mr Walter Judd. Big changes were about to happen, as we shall see in the next article.