This year Theatre Royal Windsor will be hosting a variety of performances, from comedies to magicians and the beloved Christmas panto.

Here is a round-up of the five upcoming performances currently scheduled for 2023.

Other one-off shows will be taking place throughout the year, however, we have collated those that are running for a week or more.

Just days away from the production debut at Theatre Royal Windsor, this award-winning comedy sees BAFTA award-winner Jessica Ransom, Diane Keen and Neil McDermott lead the cast in this ‘thought-provoking’ new comedy by Laura Wade, about one woman’s quest to be the perfect 1950s housewife.

The synopsis reads: “Every couple needs a little fantasy to keep their marriage sparkling. But behind the gingham curtains, things start to unravel, and being a domestic goddess is not as easy as it seems…”

Home, I’m Darling won the 2019 Olivier Award for Best New Comedy.
It will be showing at Theatre Royal Theatre from January 25 until February 4.

The West End comes to Windsor in this ‘smash hit’ musical and winner of the WhatsOnStage award for Best New Musical.

The synopsis reads: “Welcome to Westerberg High where Veronica Sawyer is just another nobody dreaming of a better day. But when she joins the beautiful and impossibly cruel Heathers and her dreams of popularity may finally come true, mysterious teen rebel JD teaches her that it might kill to be a nobody, but it is murder being a somebody…”

Dubbed ‘wickedly funny’, this production is coming to Theatre Royal Windsor on February 14 until February 25.

The Grass is Greener

This ‘charming’ and ‘beautifully written comedy’ written by Hugh and Margaret Williams follows a family in the 1950s as they deal with new Inheritance Tax laws.

The synopsis reads: “Aristocrats Victor and Hilary, happily married for some twenty years, are forced by the new 1950s Inheritance Tax laws to open their stately home to the half crown paying public.  A charming American ventures into the private apartments, encounters Hilary and both are targeted by Cupid’s merciless arrow. To rescue his threatened life and love, Victor resorts to an ancient and violent method of resolving the dispute.”

The Grass Is Greener was a huge hit in London’s West End and was subsequently adapted into an award-winning film starring Cary Grant, Deborah Kerr, Robert Mitchum and Jean Simmons.

It comes to Theatre Royal Windsor on March 3 until March 18.

Sherlock Holmes: The Valley of Fear

Sherlock Holmes is coming to Windsor in his quest to get to the bottom of a murder.

The synopsis reads: “A mysterious, coded message is received, a warning of imminent danger, drawing Sherlock Holmes and the faithful Dr Watson into a tale of intrigue and murder stretching from 221B Baker Street to an ancient moated manor house to the bleak Pennsylvanian Vermissa Valley. Faced with a trail of bewildering clues, Holmes begins to unearth a darker, wider web of corruption, a secret society and the sinister work of one Professor Moriarty.”

Sherlock Holmes will be at Theatre Royal Windsor on April 3 until April 8.

The 2023 Christmas panto has been announced as the magical tale of Aladdin.

The synopsis reads: “Make your wishes come true and join us on this magical carpet ride of adventure and fun.  Featuring Theatre Royal Windsor’s traditional pantomime comedy capers, with a sprinkle of magic, dazzling dancers, colourful costumes and a glittering star cast.  A treasure of a show which you won’t want to miss.”

Kevin Cruise and Steven Blakeley are reported to be making a return to the stage.

With the panto still in the very early stages, audiences can expect its premiere on November 24 with the final day being January 14. 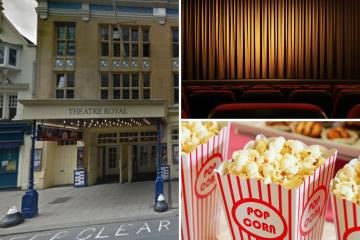