Coronavirus was the reason behind more than half of NHS staff absences at Frimley Health as the new year began, figures show.

Troops are getting ready to support the NHS through the current wave of Covid-19, as staff absences due to the virus have risen by 59% nationally in seven days.

NHS England data shows 530 staff at Frimley Health NHS Foundation Trust were off sick on January 2 – the latest date for which data is available.

This was a 37% increase on a week before, when 225 Covid-related absences were recorded.

Based on monthly workforce data for September – the most recent available – the figures suggest one in 25 NHS staff working in acute hospital trusts are off for Covid-related reasons.

The army said it could offer assistance to more hospitals around the UK if needed, after 40 military medics and 160 general duty personnel were drafted in to help fill gaps caused by absences of NHS staff in London.

Air Commodore John Lyle said: “We can’t really forecast too far ahead, but certainly, throughout this current surge, we know that it’s particularly difficult in London at the minute, but we are aware that this is impacting all across the United Kingdom.

“We remain in discussions and there are a number of areas where we’re looking at the potential for more assistance.”

He said: “Omicron means more patients to treat and fewer staff to treat them.

“While we don’t know the full scale of the potential impact this new strain will have, it’s clear it spreads more easily and, as a result, Covid cases in hospitals are the highest they’ve been since February last year – piling even more pressure on hard-working staff.”

Patricia Marquis, the Royal College of Nursing’s director for England, said the situation was not safe.

She said: “Outside of healthcare, staffing shortages are closing shops and cancelling trains but nurses can’t stop helping their patients.

“Instead, they find themselves spread thinner and thinner, but they can’t keep spinning plates indefinitely either.”

Matthew Taylor, chief executive of the NHS Confederation, which represents health authorities and trusts, said people should not feel “concerned” by the presence of the military in hospitals.

He added: “The NHS is not going to disintegrate – it’s been dealing with this crisis for two years and it will deal with it again and NHS managers will burn the midnight oil thinking about how they deploy their resources to deal with things that are most urgent.” 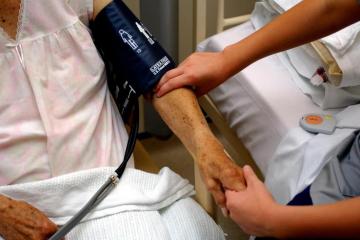